Nissan is set to debut its all-new 2020 370Z 50th Anniversary Edition at this week’s 2019 New York International Auto Show!  Incredibly, it’s been 50 years since the first Nissan Z-car was manufactured back in 1969! 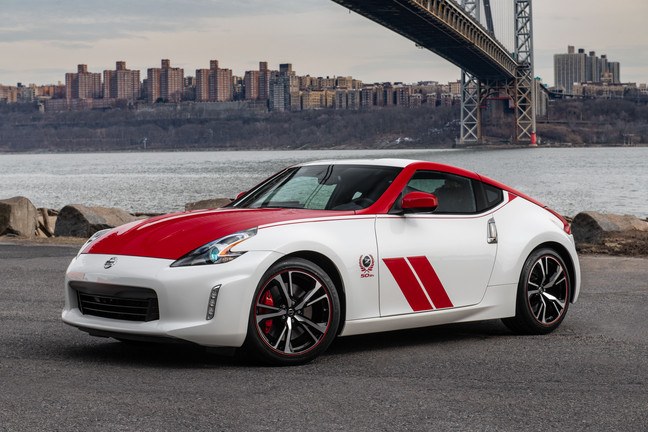 The 2020 Nissan 370Z will be offered in four trim levels:  Base, Sport, Sport Touring, and 370Z NISMO.  However, the 50th Anniversary Edition of the 2020 370Z has been based on the Sport Trim – and it will come available in two color choices – white and red and silver and black!

On the exterior, the 370Z will feature 19-Inch Alloy Wheels with Red Accents (wrapped in Bridgestone Potenza S007 tires), Special 50th Anniversary Front and Rear Badging, and Signature BRE Stripes – which will run along the sides of the vehicle – and also run along the trunk, hood, side mirrors, and A-pillars!   In addition – in honoring the Datsun 240Z’s C-pillar – Nissan has added a thin accent color line – which culminates into a small triangle – by running the color line from the headlight to the end of the rear window!

Under the hood you’ll find a 3.7-Liter V-6 Engine, generating 332 Horsepower and 270 Pounds Torque. You also have the option of choosing a 6-Speed Manual or 7-Speed Automatic Transmission!

The original Nissan Z-car – known as the Nissan Fairlady Z – was sold in Japan in 1969, and it was then “exported” as the Datsun 240Z. Since 2009, Nissan has manufactured the Nissan 370Z – it’s newest Z!   It’s also important to mention that the 370Z 50th Anniversary Edition will be only be available in limited numbers – with only 50 vehicles available in Canada.

If you are interested in learning more about Nissan vehicles, please stop by our dealership and one of our Sales Consultants will be more than happy to assist you.  Also, please feel free to take a look at all our Nissan New Online Inventory on our Guelph Nissan Website.